· Last year, rates on the busiest routes from China to the west and east coasts of the US ended 208 per cent and 110 per cent higher than in 2019

· China delivered 2.6 million 20-foot containers last year, with more than 70 per cent produced in the second of 2020 in a bid to meet demand Since last summer, container freight rates have been rising mainly due to sustained demand, particularly for home-related items, as well as an increasing shortage of containers and other equipment. Photo: Xinhua

Until recently, it was not that common to use the word container within the shipping industry, with concerns more focused on the bigger picture of vessels and capacity.

The coronavirus and its impact on the global supply chains, though, has changed that, and amid surging demand and record freight rates, it is a trend that industry insiders expect to extend into the second half of the new year.

Since last summer, container freight rates have been rising mainly due to sustained demand, particularly for supplies to fight the coronavirus as well as work-from-home related items, as well as an increasing shortage of containers and other equipment.

At the end of last year, rates on the busiest routes from China to the west and east coasts of the United States stood 208 per cent and 110 per cent higher than in 2019 per 40-foot container, according to the Baltic Exchange, a maritime industry and freight market information provider. 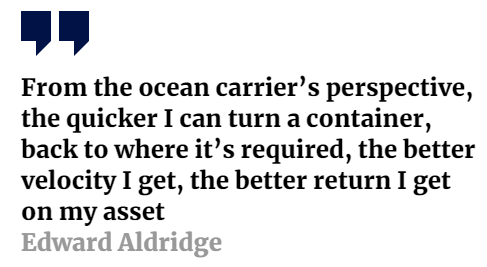 The cost of container shipping from Asia to Europe also saw an unexpected surge at the end of last year, with rates from China to Northern Europe increasing by more than 60 per cent in December alone. The rate at the end of the year was even higher than the rate to the east coast of the US, which is traditionally 50 per cent more expensive.

“For many, many years, everyone talked about vessels and capacity, but no one would ever mention the word container. Now the word container is at the forefront,” said Edward Aldridge, senior vice-president of global ocean freight at logistics company Agility.

“From the ocean carrier’s perspective, the quicker I can turn a container back to where it’s required, the better velocity I get, the better return I get on my asset.

“Having more [containers] is not the answer, the answer is the velocity of containers. What that means is that the loaded export container from China has to be on a vessel that has fast enough turnaround, turns and gets back to where it is required in the most efficient way.” At the moment, there is a severe imbalance of container distribution between different markets. In Asia, exporters are scrambling to find any available containers to load goods, while in the US, Britain and Australia, ports are struggling with a lack of workforce and infrastructure to handle surging inbound goods, which then delays the return of empty containers.

On some ocean freight services running between Europe and Asia, port calls in the Middle East have been restricted because shipment of empty containers heading back to Asia are in such high demand.

As the world’s largest container producing country, China delivered 2.6 million 20-foot containers last year, with more than 70 per cent produced in the second of 2020, according to the China Shipowners’ Association.

This level of production has approached the upper limit of capacity in China, and manufacturers have little intention to increase it due to the short-term nature of the demand caused by the coronavirus.

Carriers have deployed almost all the resources they can to help solve the problem, by either ordering more ships, having ships sail faster, or by restricting the amount of time importers can hold onto containers.

Freight forwarders like Agility are now asking exporters to take the unprecedented step of booking vessel space and containers up to two months in advance.

“For every two bookings that are placed, only one materialises. What that means is that the shipper placed multiple bookings to cover potential changes and disruptions to the supply chain,” Aldridge added.

It is hard to predict when seaborne freight rates will return to normal, although that is partly linked to how fast coronavirus vaccines can impact consumer spending and shift the focus from buying home-related goods to spending on restaurants, hotels and other service sector activities. “The container shipping supply chain is comprised of a large number of elements, and presently, virtually every single one of the involved components is finding itself in a state of turmoil. Getting the market to a normal level of predictability and performance will take an unknown amount of time,” said Lars Jensen, chief executive at SeaIntelligence Consulting.

“The magnitude and speed with which the consumer behaviour – and hence impact on the container markets – will change in 2021 is exceedingly difficult to predict given that all modelling of this is quite literally virgin territory.”

Demand, though, has continued to build up in the weeks before the Lunar New Year, which starts in mid-February and during which production will be typically shut down for a week or more.

Aldridge from Agility added that demand has remained strong in the first half of the year, leaving a possible window for shipping costs to drop in the second half of 2021.

“Looking further ahead, the spread of vaccines for Covid-19 and the associated return of consumer spending on services rather than goods and resulting sustained decline in shipments of consumer goods may take longer to deliver,” Panjiva said.